© Alex Wong – Getty Images During Thursday’s final night of the 2020 Republican National Convention, Melania Trump wore a lime green dress by Valentino that got the internet moving on making memes, and using her dress as a green screen. The results are what you would expect. On August […]


© Alex Wong – Getty Images
During Thursday’s final night of the 2020 Republican National Convention, Melania Trump wore a lime green dress by Valentino that got the internet moving on making memes, and using her dress as a green screen. The results are what you would expect.

On August 10, 2012, Melania Trump tweeted out one of the internet’s finest gems—a photo of a smiling beluga whale with the caption, “What is she thinking?” On August 27, 2020, First Lady Melania Trump appeared on stage at the coda of a truly bizarre Republican National Convention wearing a lime green dress practically made to be green-screened by the internet. Under my breath, I whispered, “What is she thinking?” Suddenly, Melania was my beluga whale. I, Melania.

These moments, our American moments, are baffling. It is an understood rule that dresses of this particular hue are an invitation for mockery, and yet Melania appeared in lime, daring the internet to Be Best. The internet has never listened.

Within a half hour of Melania appearing on stage Thursday evening, the internet took Melania’s perfectly green dress, utilized its collective Photoshop skills, and got to work. Granted, Melania Trump has never particularly been a public figure who needed supplemental material to become a punchline. Take, for instance, the speech she gave at the 2016 Republican National Convention, which ended up being a carbon copy of Michelle Obama’s. Or, hell. Let’s go back to last night and just take in this strange exchange with failed fashion designer and Senior Advisor to the President, Ivanka Trump.

This was so weird. #RNC2020 pic.twitter.com/YHReTl0bfT

I’m sorry, Raven, did you see a vision? Working on your Blue Steel pose? Is Goody Proctor out past the witching hour? Or in a twist, is Melania just a good ol’ Southern gal passing along the patented Bless Your Heart face in lieu of being able to say it out loud?

The internet’s finest work came a few minutes later though, when the Twitter was flooded with green screened edits to Melania’s dress. Perhaps you’re interested in the infection and death totals from this year’s completely mishandled coronavirus pandemic?

Or maybe this one is, oh…oh gosh.

This one also has a really nice ring to it because racism really does suck!

It was on this day that melania trump made trolling history by wearing a chroma key green dress. pic.twitter.com/WsNIQN4boT

For the more meta-inclined, here’s Melania holding Trump’s hand while wearing a dress exhibiting how she, historically, does not want to hold his hand.

Then there’s always this imaginary world where someone from this administration takes a step toward progress.

By the way, the weather later this weekend will be mild, but be sure that you’re carrying your umbrella! A few occasional drizzles stands to put a damper on that park walk you’re considering on Sunday morning.

No matter how the internet utilized the gracious canvas that the First Lady offered, it’s nice to know that in this era of turmoil, confusion, and uncertainty, the internet will always be around to troll. But again, I repeat, what is she thinking?

Thu Sep 3 , 2020
AI device for nursing homes can monitor elderly residents’ precise movements using radio waves and call for help if needed The device bounces radio waves around a room to look at objects and movement When it detects movement it bounces the signal back to the mounted sensor  Artificial Intelligence analyses […] 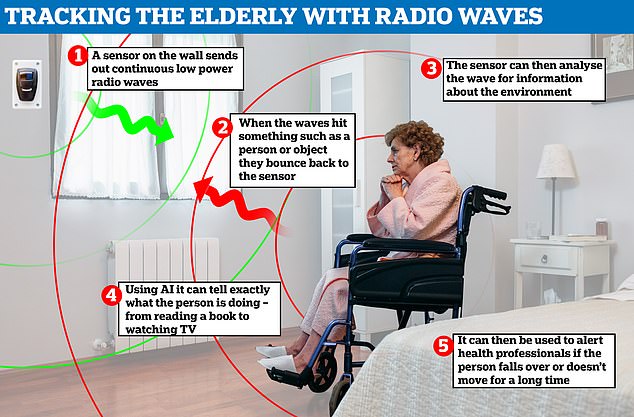